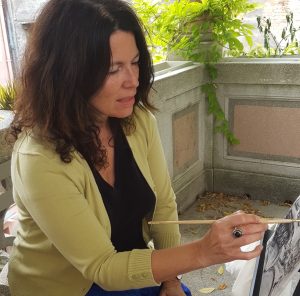 Jeannette Perreault is a Quebec artist. Essentially, she is an autodidact, but also enrolled at Université du Québec à Montréal from 1982 to 1984 to study the visual arts, art history and drawing. She participates in numerous workshops for life drawing and introduces herself to mixed techniques as well as to ink on paper. Her primary medium is oil on canvas.

In portraits and still lifes, she explores existential themes from an intimate point of view.  In coffeehouses in Montreal, Paris, or any city where she’s travelling, she sketchs the specific    ambiance of each location. With her fluid stroke, she grasps the expressions of the men and women lingering in these places.  Her drawing reveals the urge to capture the truth of the moment.  Another part of her career evolved around the stage : dancers, musicians and, especially,  actors.  Since the 1990s she draws actors in their dressing rooms and backstage from the Théâtre du Nouveau Monde (TNM) in Montreal.  This approach renders the necessity to seize emotion in a minimalist stroke that holds the essence, the soul, the sensibility of the model.  At the theatre and in the coffee shop, she ‘s looking for that specific gesture that characterizes individuality.  Through the expressive force of her colors she creates harmony evoking light.  She develops a plastic language by means of which thick texture and precise gesture confer an intensity, an undeniable freedom, to her works.

Jeannette Perreault is represented by Roberts Gallery in Toroto since 1991, and since 1992 by Valentin Gallery in Montreal.  She also featured in L’Harmattan Gallery in Baie-Saint-Paul in Quebec, in West End Gallery in Edmonton in Alberta, and in Singulart Gallery in Paris.  In the last thirty years, she participated in more than seventy collective exhibitions.  Her works are part of many public, corporative and private collections in Canada, United States, Europe and in Asia.

You can leave your comments at the bottom of articles and/or relevant pages using the form you will find at the bottom of each page. To send me a private message by email, PLEASE use this form for added security. 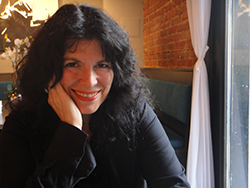